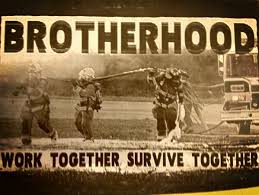 What does the word “Brotherhood” mean to you as a firefighter?  Do you think that the term is loosely used and the meaning has lost a bit of the power it once possessed?   I joined the fire service as a volunteer in 1996 during a period of time when the department I served was transitioning from a mostly volunteer to mostly career department.  Many of the firefighters that I joined ranks with moved on to serve as career members of the department.  In the beginning a bond was quickly formed between my new family and I felt like I had known every single member for the entirety of my life.  The interesting thing about the fire service is that as you fight fires and experience disasters of varying degrees you become closer and form a bond that cannot be known except to the select few that stand next to you when you are performing acts that most people will never have the ability to fathom.  In the volunteer fire service the climate can change quickly as members move on and new members join, but the sanctity of the job remains the same.  Career firefighters form a special bond among platoons, battalions, shifts, and countless other descriptive phrases.  They experience the same change as members retire, move up the ranks, or transfer.  The men and women who you work and sit next to on the rig change, but the simple fact remains that we are “brothers”.  The problem comes to the surface when inevitably that one personality exists among the ranks that simply is not liked, or becomes the whipping posts for firehouse jokes.  When change does not exist and the same members serve for years the climate remains the same and that person who is not liked has a certain way of fitting in and simply learns to dish it back as hard as it comes in.  Let’s face it we just don’t see the same number of working fires, nor do we have the same amount of free time to spend with our fellow firefighters like we did when first joining.  Everybody grows up and gets married, or has kids, and the weekly drills, meetings, and training become more of a chore than  chance to bond.  Member retention and budgetary needs become more important than getting to know each other and truly bond as firefighters.  In my opinion the “brotherhood” still exists if you let it, but in many situations hatred and bullying may be starting to overrule.  Let’s try to remember what the tradition of this job means and focus on bringing everybody into the fold and welcome them with open arms.  That person who you may not like or take the time to understand could very well be the one that saves your life one day.  Even worse, that person who is ignored could end up abusing controlled substances or worse committing suicide.  Never forget to to give back to the fire service and protect your brothers and sisters.  Take the time to ask questions and never leave a man or woman behind.  Ignorance and unwillingness are not suitable excuses when you are lowering a casket into the ground simply because nobody thought to ask a few questions.  Pass your knowledge on to new recruits and take the time to make them feel welcome into the greatest job on the Earth.  Remember what it was like when you joined the fire service and how you had no clue what and where the tools were located on the truck.  Remember that first time that heat pushed you to the floor in a dark hallway and that nagging feeling of panic pushed up through your throat telling you to get out.  You had a brother next to you that made it possible to get through.  Ask questions and get to know your family at the firehouse and let the “Brotherhood” survive! 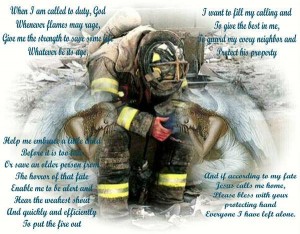 Help us help our first responders

Get in touch with us